The Creepy Pond: Getting To The Root Of The Problem 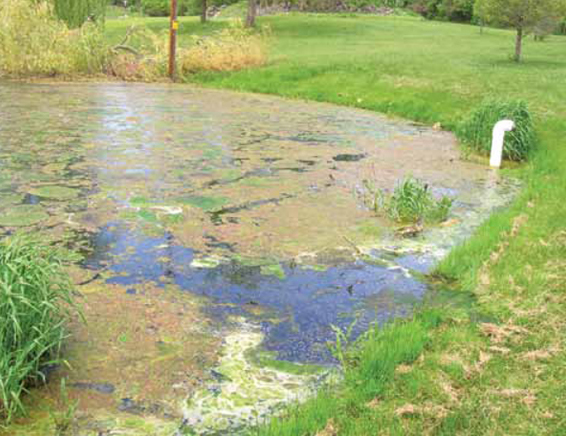 The Whitehall Pond has been an annual maintenance client of Solitude Lake Management since March, 2009, and it has been one of the most challenging water bodies that we have encountered. Our typical Annual Lake Management Contract includes various Integrated Pest Management strategies to control the specific nuisance aquatic vegetation species in each of the ponds and lakes that we service. In most cases, we araeratorse able to visit a water body a couple of times a month and keep the majority of the vegetation in check using a handful of commonly implemented control strategies. But at the Whitehall Pond, the nuisance vegetation species are so unique, prevalent, and persistent that our staff refers to it as “The Creepy Pond.” The property is in Clear Brook, Virginia and our first visit to the pond was in February, 2009. As would be typical during the coldest month of winter, the pond was fairly dormant and we did not identify any species of nuisance aquatic vegetation in the pond at that time. However, the client requested a proposal for a contract with a start-date of March 1, 2009. We provided an estimate for the “worst-case scenario” based on the size and volume of the pond. In hindsight, we should have taken it more seriously when the client complained that the previous contractor did a “horrible job” and that the pond always looked “hideous”. But we assumed that we would be able to provide much better service and would have no problem satisfying the clients’ goals to have “an aesthetically pleasing pond where they could toss in a fishing line every now and again and catch something other than submersed vegetation.”

The pond is located in a sparsely populated area and the land use in the watershed is primarily agricultural and rural residential. It is notable that the upstream landowner has historically used human sludge to fertilize his fields, and the pond owners have been concerned about the effects of this practice on their water quality.

Along with the perennial stream inflow, there are also significant springs throughout the pond, so the water remains fairly cool during the summer and does not freeze during the winter. The flow rate is significant, but is difficult to measure because the weir for the pond is a rock pile and the discharge flows through the rocks rather than over the top. The maximum depth in the pond is 7 feet with an average depth of 4 feet. The pond is aerated with a single 5HP floating volcano aerator. The Farm Manager’s home is situated right at the edge of the pond and the entrance to the owners’ residence is on the other side, so an attractive appearance of the pond is a high priority. The pond is used for occasional recreational fishing (catch and release). The water is also used during the summer months for irrigation of a large vegetable garden that includes peppers and tomatoes. The irrigation restrictions limit the herbicides that we are able to use in the pond, especially with the sensitive Solanaceae (nightshade) species. 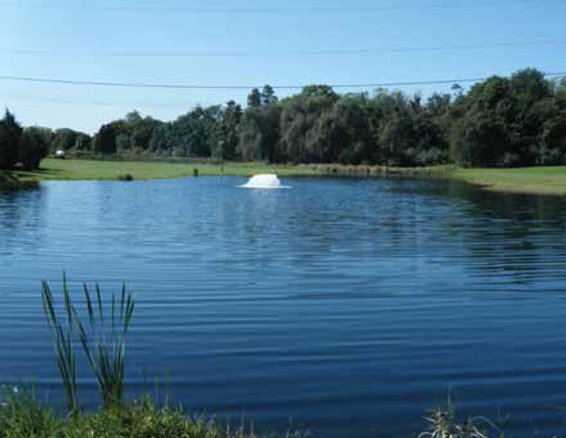 The first nuisance plant species to appear was curly-leaf pondweed, which began growing in late March. Because we wanted to take a proactive approach and to gain long-term control of the plants, we opted to use the granular herbicide Sonar ONE (fluridone). As a slow-acting systemic herbicide with a prolonged exposure period, we would have the advantage of controlling not only the pondweed, but most other submersed species that might begin growing in the spring. Since it was so early in the season, we were hoping that we could have the pond treatment done before the clients needed to use the water for irrigation. We applied the herbicide at 25 parts per billion (ppb), desiring to maintain a residue of 7 to 8 ppb to stay above the minimum threshold for control of the target species. It’s a very basic treatment that we perform hundreds of times every year. However, our first moment of concern with the project was when the results of our fluridone assay 2 weeks after the treatment came back at ZERO ppb – absolutely no detectable residue of our active ingredient in the water column. This was an indicator that the flow in the pond was much more substantial than we had imagined and was therefore not conducive to the use of any products where a persistent residue of the active ingredient is required. So we began to battle the vegetation with contact herbicides instead.

After we were very successful in controlling the pondweed early in the season with Aquathol Super K (granular dipotassium salt of endothall), hydrilla started growing. We treated with chelated copper and diquat dibromide a couple of times and were able to get control. Then slender pondweed became established, which we also treated with copper and diquat. The owners indicated that they were minimally concerned with the submersed vegetation as long as it did not impact their fishing, but preferred that the surface of the pond remained clear. Based on the results so far, they were very happy with the condition of the pond under our care. That was when the algae and duckweed growth began and when the large mats of liverwort that had been growing on the bottom of the pond began to rise up to the surface. 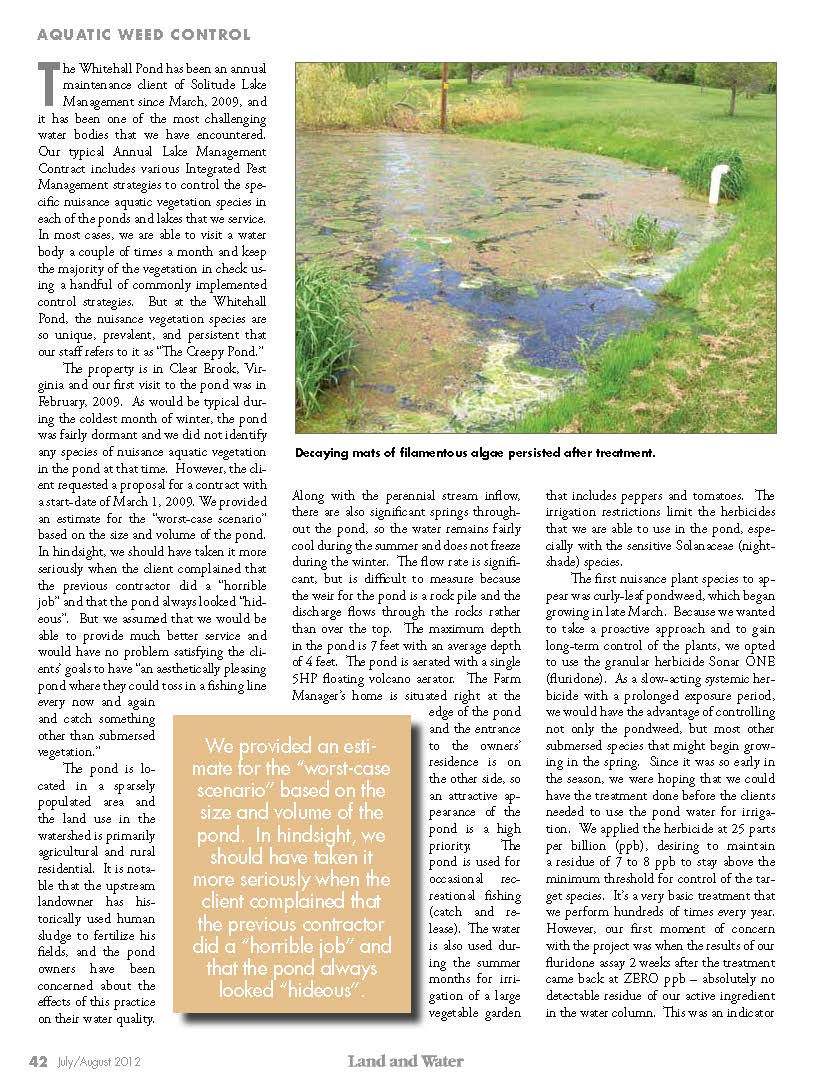 At this point, we were only three months into our contract and had expended over half of our annual budget. But we diligently continued treating the pond, striving to get ahead of the issues and to keep the clients happy. Fortunately, the duckweed did not proliferate beyond a few patches that were easily controlled with foliar treatments. Liverwort is very difficult to kill, however, we were able to maintain satisfactory control with liquid hydrogen dioxide and diquat. By mid-season, we were able to achieve adequate control of all of the herbaceous nuisance species. The algae, though, were a constant and persistent battle for the entire season. There were thick mats of filamentous algae that often filled the entire water column. The decaying biomass of algae and liverwort accumulated on the weir after treatments because of the high flow, often causing the water level to rise above normal pool. There was also a very strange pink “slime,” that looked a lot like viscous strands of Pepto Bismol, which appeared throughout the pond later in the summer. It was a confounding, challenging and frustrating site. We used a rotating arsenal of Captain, Green Clean, Cutrine Plus, and Hydrothol. Even with frequent treatments, the pond was almost always partially covered with algae. Not only were the conditions in the pond unsightly, but there was also a very unpleasant stench on hot days. And on top of everything, we were losing money on the contract.

We made recommendations to the clients to add a submersed diffused air aeration system, to stock triploid grass carp, and to have water quality testing and algae identification services performed, but they did not want to spend additional funds on the pond. Surprisingly, they said that the pond was looking better than it ever had and requested to renew their contract for the following year. Without a boring repetition of the same gory details, 2010 was an equally grueling and minimally profitable year for the project. Once again, though, the clients were happy with the results and renewed their contract.

When the SePRO SeScripts program became available in 2011, we took advantage of the opportunity to perform a case study on the pond, which included a complimentary comprehensive water quality evaluation. We submitted algae and water samples in early June and were not surprised that the results showed high nutrient levels and classification of the pond as hypereutrophic. All of the nutrient parameters were “High” or “Relatively High”, with Total Phosphorus of 312 ppb in the water column and 1,086 mg/kg in the sediment. The dominant algae species was found to be Spirogyra, along with some diatoms and the cyanobacteria Nodularia. The pink “slime” could not be specifically identified, but was found to be photosynthetic cyanobacteria, with colonies of cells enclosed in a mucilaginous envelope. The algaecide rate and exposure testing found Captain XTR to be the most effective product and treatments of 1.2 – 2.4 gallons per acre-foot were recommended. For nutrient management, it was recommended that we apply 370 pounds of the phosphorus binder Phoslock to remediate the free reactive phosphorus in the water column and an additional 2,330 pounds to remediate what is in the sediment.

Because our annual budget for the contract was fixed and the client did not want to allocate additional funds, we were unable to implement the entire recommended phosphorus remediation. However, we did perform the water column remediation anticipating that it would significantly improve the water quality and offset some of our herbicide costs. In midJune, we performed an initial max-rate algaecide treatment with the recommended product followed one week later by the application of 400 pounds of the phosphorus binder.

The results were dramatic. While we still had to treat the pond for algae during almost every maintenance visit, we were able to control the mats before they reached the surface. The pond looked consistently better throughout the season, which made our clients very happy. The phosphorus level was measured again in early July of 2011 and it was found to be down to 100 ppb. It was still high, but was on the low end of the hypereutrophic scale rather than “off the charts”. Best of all for us, the contract was profitable for the first time in 2011. By treating the root of the problem rather than the symptoms, we were able to improve not only the appearance and health of the pond, but our bottom line.

As a result of our experiences with this pond and some of the other case studies that we performed in 2011, we have implemented a proactive application of phosphorus binder to many of our most problematic ponds as part of our Integrated Pest Management Strategy. Although the cost of the product was not included in the original pricing for the contracts, we have saved enough money in algaecide costs to make it a viable practice. Also, many pond owners have been so encouraged by the results of the water column phosphorus remediation application that they were willing to pay the additional cost to perform the sediment remediation as well. Ultimately, the additional up-front costs of nutrient remediation will lead to more aesthetically pleasing and healthy ponds and lakes with fewer aquatic herbicides being discharged into our waterways.