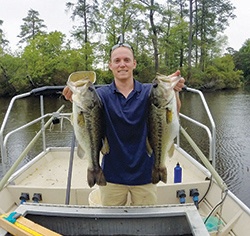 Establishing and maintaining a high quality fishery is a challenging task requiring a firm understanding of fisheries management. By using a variety of proactive strategies, fish populations can be manipulated over a few years to produce a desired outcome.

One specific fishery, an 85 acre mill pond located in the heart of Virginia, recently improved its largemouth bass population with the help of SOLitude. Rich in history, the pond was built over 300 years ago, in 1678, to run a mill for grinding wheat and corn. A couple hundred years later, in 1900, the pond was purchased and the Cohoke Fishing Club was formed.

Like the pond, the Cohoke Fishing Club has a long history, and in its prime would yield around 60 fish annually weighing between 5 and 10 pounds, while during off years as few as three of these quality fish were caught. Inconsistent numbers of quality fish over the years is natural when dealing with Mother Nature, but some members of the club started wondering if their laid back management strategies were truly allowing for a quality fishery.

In 2009, the club experienced several negative variables simultaneously. The waterbody was being taken over by hydrilla, their bass seemed underweight and the number of big bass being caught was lower than desired. As a result, the club decided to seek professional advice to gain better control over their fate.

Although the fishery was falling on hard times, the club had one thing in particular in its favor. Over the past several decades the club kept good records of what they caught, which provided insight into the fishery’s past that would not have been obtained otherwise. By using the extensive data set collected by the club, performing an electrofishing study and analyzing water quality testing from the spring of 2010, several limiting factors were identified. The data showed that the fishery was predator heavy, with a large number of fish measuring between 12 and 15 inches in length. It also showed that 80 percent of the bass in the pond were less than 15 inches long. When reviewing the club’s historical fishing records, it illustrated that the number of big fish caught over the years was inconsistent. This inconstant trend indicated that past management strategies needed to be modified to produce a consistent result. Using the data, a proactive management strategy was developed and implemented by SOLitude. The club shifted from a catch-and-release fishery to one that actively harvested intermediate size bass. Other actions included eradicating the hydrilla using herbicides and triploid grass carp, improving fish cover by adding cedar trees, supporting plankton blooms through fertilizing, installing two fish feeders, removing the nuisance wildlife through trapping, stocking adult bluegill to boost their numbers, implementing a catch-and-release policy for all bluegill, and implementing active angler harvest for all non-target predators such as chain pickerel, white perch and black crappie.

Managing the fishery over the past six years has required the club to put forth a large amount of effort and patience. For the first year or two, their hard work did not show significant evidence that the fisheries management approach was working. But, as the club continued with the strategy, the fishery’s response became noticeable and club members were motivated to become even more involved.

After six years of hard work by members, along with cooperation from Mother Nature, the waterbody has successfully transformed into a higher quality fishery. In 2010, only one out of five bass caught exceeded 15 inches. Now, over 50 percent of the bass being caught by club members are greater than 15 inches. Additionally, the number of bass greater than 5 pounds has improved dramatically, measuring from only 16 fish caught in 2010 up to 48 fish caught in 2015.

The fishery’s success is the direct result of hard work and its club members’ willingness to change. Although the fishery has experienced a few good years, it is still vulnerable if the members do not stay proactive. The club now has an opportunity to control the fishery’s future, allowing members to play an active role in adding to the waterbody’s rich history.

Dave Beasley has over 10 years of experience growing and managing successful trophy fisheries. David earned a Bachelor of Science degree in Fisheries and Aquaculture from State University of New York in Cobleskill and is currently the Director of Fisheries for SOLitude Lake Management, servicing the eastern United States and offering fisheries consultations nationwide.