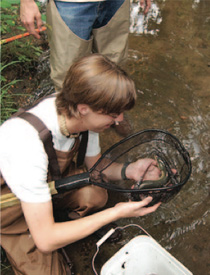 Recently, while surveying some ponds and canals that feed into a tidal inland bay, I noticed some small slender creatures swimming about. They were no more than three inches long, and swam with whip-like bodies that wiggled about as fast as anything I’ve ever seen. They were young eels, probably tiny females though science isn’t sure about that yet, making their way upstream after what can only be described as an incredible journey.

The American Eel (and it’s very similar European cousin) is one of the most remarkable fish in the world. While many fish species like Salmon and Shad swim into freshwater to breed and live the rest of their lives in the ocean, these eels do the exact opposite. Eels, the females at least, swim up our rivers at a young age, then live in fresh water for 10-30 years. We used to think that male eels never left coastal areas, but now we think that population density might drive sex determination. In short, we don’t know what causes an eel to be male or female.  We do know that females can reach lengths in excess of five feet, while males rarely reach past three. We also do not know what triggers an eel to decide it’s time to breed, as some do this at less than ten years of age while others remain in our rivers until they are above thirty, but we do know what happens when they do.

From ponds, lakes, rivers, and streams across North and South America, from Greenland to Brazil, eels make their way downstream to the ocean and all the way to the Sargasso Sea, near Bermuda. There they breed, and die. Larval eels make their way back to the east coast without guidance from their parents, and not necessarily going to the same river its parents may have come from. An eel from Georgia might mate with an eel from Maine, and any offspring that survive the journey may wind up in Newfoundland, Florida, and Venezuela.

Eels have a remarkable ability to get around obstacles. Dams, hydroelectric plants, and fountain debris screens seem to make no difference to them. If your pond feeds into a stream or river in the Eastern US, even if only by a stand pipe protected by a grate, there is probably at least one of them in your pond, though you are unlikely to ever see it.  Eels have even been known to cross small distances of otherwise dry land during heavy thunderstorms. They are, however, highly secretive and nocturnal.

It is the secretive nature of eels, combined with some unique physiology, that have made them difficult to study. We really know next to nothing about them even though they are extremely common. To me, that is what makes them one of the most interesting creatures I have ever had the good fortune to see.