The pursuit of managing trophy fisheries has its way of evolving into a lifelong passion for some of us. Whether you’re a professional or a hobbyist, frustrations can build as we learn first hand that high catch rates of large fish was never Mother Nature’s intent. Simply put, ponds with outstanding fishing are a rarity. When the stars align and a fishery yields trophy fish on a regular basis, you’ll typically find it short-lived, likely lasting only 5-10 years. For pond managers and owners daring enough to override Mother Nature’s natural design, it is inevitable lessons will be learned along the way.

Determined to beat the odds, one property owner in the mid-Atlantic region has continued to make strides overcoming challenges trying to grow large numbers of trophy fish. As you may recall from an article in the September/October 2014 issue of Pond Boss, this property has two 3-acre ponds being groomed as primary fishing ponds. The owner’s intention is to maintain a population of far more big fish than these ponds could produce on their own. To bring this vision within reach, more water was needed as grow-out ponds to produce adult predators to relocate to the key fishing ponds. So, three additional ponds on an adjacent property totaling 15 acres of water were acquired.

One of the 3-acre fishing ponds (fishing pond #1) is being managed for diversity. Once developed over the next few years, fishermen will find a level of mystery surrounding their experience as they exhaust themselves trying to out-muscle one of many fish species. The long-term goal in this pond is to have trophy caliber tiger muskie, catfish, hybrid striped bass, largemouth bass, and bluegill. Currently, the fishery has a thriving population of adult bluegill, several hundred channel catfish ranging from 4-18 pounds, one hundred young hybrid stripers, a hand full of young tiger muskies two foot in length, and a large population of largemouth bass weighing three pounds. The strategy for this pond will be to grow the hybrid stripers, largemouth bass, catfish, and bluegills using a heavy regimen of floating fish feed while letting the tiger muskies forage on baitfish. To boost growth rates, small trout will continue to be stocked each fall as additional forage. The other 3-acre fishing pond (fishing pond #2) is dedicated to trophy largemouth bass. It’s been managed four years and currently has a couple dozen bass weighing between five and six pounds. Bass are in outstanding condition and pre-spawn many of them have relative weights between 120 and 130. The primary forage source is a population of bluegill, but trout are stocked every fall to obtain quick bass growth. Over the last couple years, bass have grown several pounds.

One challenge has been trying to maximize growth in these two ponds while also meeting the desires of the land owner to catch large numbers of fish each outing. Add the extra water on the new land, and it still takes time for the process. While it’s taking longer than he’d like, we are trying to override Nature’s ways, and do it in such a way as to avoid the pitfalls of trying to fool Mother Nature. He would like better catch rates, but who wouldn’t? Fortunately, now with several years of largemouth bass growth under our belts, and an ever growing number of five-plus pound bass present in the trophy largemouth bass pond (fishing pond #2), the fishing ponds are prime to take the next step towards higher catch rates.

Rather than substantially increasing catch rates of largemouth bass by minimizing food to maximize hunger, which would have a negative impact on growth, the decision was made to stock 50 more feed trained hybrid striped bass per acre in both fishing ponds. This stocking rate is fairly aggressive, but is important to entertain fishermen and meet the needs of the owner. To limit the striper’s desire to compete with largemouth for natural forage, stripers are fed aggressively with high quality floating fish food. 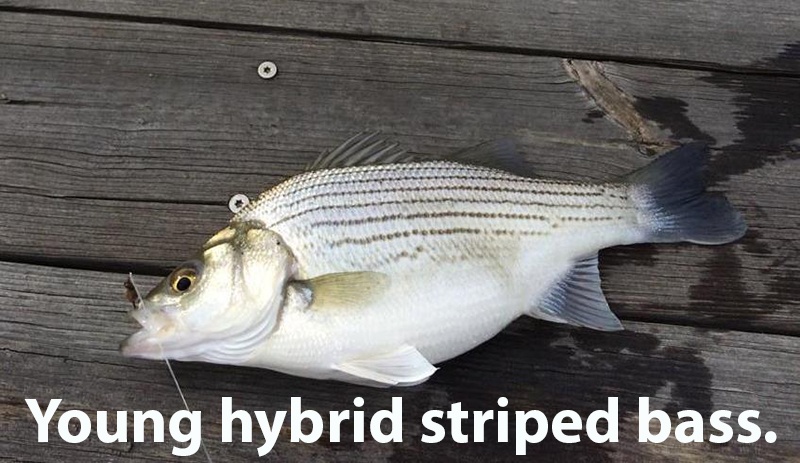 Hybrid stripers are incredibly fun to catch and can reach greater than 15 pounds, but their primary purpose is to provide fishermen higher catch rates while the 15 acres of grow-out ponds have time to produce big largemouth bass and tiger muskies. If everything goes as planned, the vision will come full circle in a few years, and big fish can start to be transferred from the grow-out ponds to the fishing ponds. As an added bonus, hybrid stripers will reach significant size within a few years, bringing an extra level of diversity and excitement to the fishing ponds.

The 15 acres of grow-out ponds, a 7-acre, a 6-acre, and one two acre pond are equipped with ten fish feeders, and are growing tiger muskies and largemouth bass. In the summer of 2013 the three ponds were reset using rotenone. Then, later that summer, we stocked bluegill, redear sunfish, golden shiners, and fathead minnows. Additionally, tiger muskies were stocked in the fall of 2013. Fast forward 18 months, to March 2015 where these ponds were stocked with female largemouth bass.

Several fishery management strategies have shifted over the last year, a few by our design, others by Mother Nature’s. The project’s biggest challenge to date, which has lead to a few adjustments to the management strategy occurred in two of the grow-out ponds over this past winter. Nuisance wildlife, both waterfowl and otters, took advantage of the thriving forage base. In the fall of 2014, the three grow-out ponds were electrofished, and all 15-acres of water were bursting at the seams with bluegill, fathead minnows, and shiners. Throughout last winter, waterfowl utilized the ponds heavily at times, but the land owner liked it. He loves to hunt waterfowl. Although we knew some waterfowl species were consuming fish, it did not appear to be a big issue. Additionally, otter signs were noticed near the ponds, and after a couple days of trapping, two otters were caught.

Although this was a hiccup thrown at us by Mother Nature, there was a lesson to be learned. The question is, did we learn? Knowing that all ponds had equal predation exposure, it was very intriguing that one pond had what it took to protect the forage fish from nuisance waterfowl, while the other two left the forage fish susceptible. What made this most interesting was that all of the ponds had cover. The 7-acre pond, which is still thriving with forage, is shallow with many rock islands throughout. The average depth is 4 feet, and the pond has thousands of sapling willow trees growing in shallow water. Additionally, water in this pond is productive with <36 inch visibility year round. The 6-acre and 2-acre ponds have a more open water layout with minimal shoreline and an average depth of 7 feet. A sufficient number of cedar trees had been installed throughout the two ponds over the last year, and it seemed that it would be enough to protect the forage base. The biggest difference between the pond that held up to the predation and the two ponds that did not, was winter time water clarity. The two ponds hit hardest by the predators tended to clear up in the winter months with visibility greater than 5 feet. Based on these facts, we presume water clarity was the primary factor that left the tens of thousands of lethargic baitfish vulnerable.

Moving forward, a proactive trapping program will be implemented to resolve the otter issue, and the amount of cover in the two open-water ponds will be increased as a preventative measure. If the plankton bloom produced this spring and summer does not keep the ponds turbid throughout fall and winter, then a management strategy to dye the water will be implemented to reduce visibility.

To help make up for lost fish, a few thousand 8-10 inch bluegill from the 7-acre pond along with gravid seven inch shiners were moved to the ponds hit hard by predators. We also bought more adult bluegill to help jump start the forage base.

Another change in management strategy has been the transition from channel catfish to hybrid blue catfish in fishing pond #1. Although channel catfish have shown great promise, and have been growing 4-8 pounds per year for the last three years, they have figured out a way to successfully reproduce and are increasing in population at a rate that is going to compromise growth rates of other fish. In addition to their overpopulation risk, they also can be challeng¬ing to catch at times.

Hybrid blue catfish have been in the long-term plans for the last two years, but availability has been limited. After finally locating this fish in March 2015, 200 of them were stocked at nine inches long. Hybrid Blues are a cross between blue and channel catfish. These hybrids take on characteristics of the blue catfish side of the family more than the channel catfish. As a result, they have the tendency to feed in open water rather than being bottom oriented. Hybrid blues are stockier and reach larger sizes than channels, and grow faster than both parents. These aggressive fish will sit atop the pond’s food chain alongside tiger muskies.

To harvest channel catfish, hoop nets were deployed and baited with old cheese. Within a couple weeks, hundreds of channel catfish were removed. Needless to say, everyone ate their year’s quota of catfish nuggets.

A side benefit to trapping out channel catfish was the ability to remove undesired fish. Hundreds of green sunfish, hybrid bluegill, and bullheads were removed in the process, and as a result, trapping has played a significant role manipulating the fishery’s future.

Keeping on track with the long-term vision, 315 female bass were PIT tagged and stocked into all of the ponds at a rate of 15 fish per acre. To help develop the best fishery possible, three different strains of bass were stocked. Two strains were pure northern that originated in hatcheries from different parts of the county. The third strain was half Florida and half northern (known as an F1 cross). Since all of the bass were fin clipped and tagged with PIT tags, there is a nice opportunity to learn how the different strains fare over the years. The long-term projection is to learn what strain grows the best in these particular ponds, and then focus on stocking more of them.

Although setbacks were experienced this past winter, the fisheries are evolving, and the long-term goal of creating high catch rates in the fishing ponds is closer than ever. Meeting the desire of high catch rates, while facing the reality that over-crowded predator populations grow slowly, make this project challenging. As Mother Nature continues to show the odds are against projects like this, the challenge and journey to beat those odds will make the end result truly special as fishermen benefit from years of hard work and intuitive thinking.