AS SEEN IN Pond Boss: Written by David Beasley, Director of Fisheries For avid pondmeisters, there’s not much worse than the sinking feeling of disbelief followed by the rush of anxiety when you stroll to your favorite fishing hole, only to be greeted by hundreds or thousands of white bellies floating around your pond. It’s sickening. Developing and managing a productive fishery requires ongoing effort and attention to detail. It takes fisheries biologists years of practice before we learn enough to maintain high odds of success, and even then, Mother Nature has a way of making things difficult. Even with extensive experience on a biologist’s side, the risk of failure looms.

A significant failure biologists face is when a waterbody falls victim to a fish kill. When a fish kill occurs, it is typically a result of a lethal drop in dissolved oxygen levels. For most warm water fisheries, this oxygen crash tends to occur in the summer months when water temperatures are above 80 degrees. Warm water temperatures, teamed with multiple cloudy days in a row or a rapid drop in surface water temperature from a heavy thunderstorm, are the primary events that trigger fish kills.

Throughout the past 15 years, I have found myself in several situations that resulted in fish kills, or that were resolved just prior to a fish kill occurring. Sometimes, the situation was predictable, but more often, the oxygen crash occurred in waterbodies that most people would not consider a high risk for a fish kill—and as result, the drop in oxygen was not foreseen.

For example, a three-acre pond in Virginia fell victim to a fish kill in 2015. The pond had average depth of six feet and a maximum depth of 15 feet. Management of the pond started back in 2013 when the landowner desired to create good fishing for family and friends. The waterbody, which was historically muddy from runoff, had only 12-inches of visibility every time it rained. On a good day, the pond had 24-inches of visibility, but would maintain a muddy brown color.

To help with oxygen levels and water quality, a bottom diffused aeration system with dual, half-horsepower compressors was installed. Due to the muddy water, the fishery relied on fish food to grow the desired fish, since water quality was not suitable for plankton to grow. Largemouth bass, bluegill, and channel catfish were aggressively fed by hand once per day, five days per week. Over the course of two years, the fishery produced quality fish and the owner enjoyed the fishery. But, one morning in late August, the distressed client called. Overnight, the fishery’s oxygen level crashed, and the pond experienced a massive fish kill. In some instances, fish kills can happen over several days; in this particular case, it occurred within a few hours.

Following the fish kill, dissolved oxygen readings were collected, as well as water samples analyzed in the lab. The results showed this pond had high pond nutrient levels and was just shy of being classified as hypereutrophic. Too many fed fish led to this problem. The pond had less than one part per million (ppm) dissolved oxygen as well as a blue-green algae bloom, although it was difficult to see the bloom because it was mixed amongst the muddy water. All these factors combined to cause the oxygen crash. 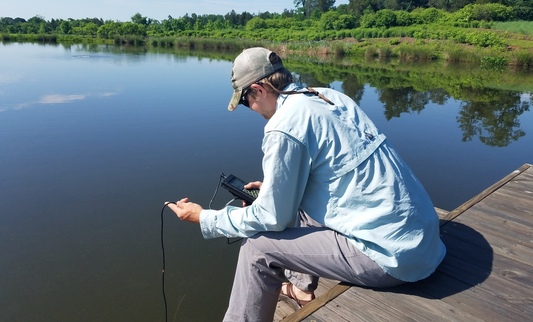 Looking back, several proactive measures could have helped prevent this fish kill. Dissolved oxygen levels could have been monitored weekly, or multiple times weekly when water temperatures reached above 80 degrees. Likewise, it would have been beneficial to install a surface aerator, such as a volcano-style fountain, which can help keep surface water moving and oxygen levels up all summer long. From a cost-savings perspective, reducing the number of fish in the pond could also have prevented the dissolved oxygen crash, since less fish would require less oxygen. Fish harvest becomes important to prevent these types of issues. Lastly, multiple water quality parameters could have been tested a couple times each summer to ensure nutrient levels were not becoming excessive, either from runoff or from the feeding program. Because the pond was muddy, it was difficult to rely on the typical visual algae and vegetation cues that most ponds provide when nutrient levels are too high.

To our surprise, soon after the fish kill, something odd occurred. The pond, which had been muddy its entire life, cleared up within a couple days. Once it cleared, it stayed clear. Based on the series of events, we learned the pond’s former fish population was responsible for keeping the pond muddy; the pond was built upon a fine clay-like material that stayed suspended easily when aggravated by the fish. Over the following few weeks, ideas were thrown around about how to rebuild the fishery while also maintaining clear water. After some thought, we chose to stock fish, selecting advanced sized, feed-trained bass to maintain a population of approximately 50 bass per acre. Hybrid bluegills were also stocked in small numbers. Fish were congregated and fed by hand at primary access points to help improve catch rates.

Three years have passed since the fish kill, and the fishery is now incredibly entertaining. Large schools of bass ranging between three and five pounds hang out around the dock, creating an exciting experience for family and friends, whether they are fishing or just enjoying the pond. Ultimately, the fish kill was a blessing in disguise; the land owner is much more pleased with the current water clarity and fishery.

Although the situation worked out well, it taught us a lesson that does not need to be repeated: monitoring is crucial if you do not have a volcano aerator in place. Most monitoring takes place in ponds that are being fertilized due to an increased risk of fish kills, but alternately, it’s not as common to establish a monitoring program in ponds that are simply feed trained.

Unfortunately, this can cause dangerous water quality issues to be overlooked until it’s too late. With this in mind, we made a change to our fisheries management approach. Twice per week during summer we have onsite personnel monitor oxygen levels in feed-trained fisheries to help catch any water quality or dissolved oxygen issues before a fish kill occurs.

To my surprise, in 2016 we came across a pond with very similar characteristics as the one from the year before. Once again, it was a feed-trained fishery that did not have a fertilization program in place or a surface aeration system. The one and-a-half-acre pond, which had a seven-foot average depth and a 14-foot max depth, experienced a depletion in dissolved oxygen after nine days of cloudy weather. This time, however, our monitoring program caught the decrease in oxygen with enough time to take action. The pond already had a bottom diffused aeration system with a half-horsepower compressor, but this system could not keep up with the biological oxygen demand (BOD) when the sun hid behind clouds for over a week. We had two options: pump in water in from a neighboring waterbody or install a surface aerator, such as a volcano aerator or a paddle wheel, to force air into the water. In this case, there were no neighboring waterbodies from which to pump water. Fortunately, we were able to install a surface aerator that was already located on another impoundment on the property. The one-horsepower de-icer that was normally used during the winter to maintain open water in front of a duck blind was placed around 10 feet off shore in the distressed pond. The deicer had a stand to hold the unit 12-18 inches off the bottom, so we placed it in three or four feet of water and angled it to shoot water in a low profile, fountain-like pattern above the surface of the pond. It was plugged into a nearby outlet that powered the bottom diffused aeration system. Within a day, the oxygen levels recovered to five ppm and a fish kill was avoided. We left the de-icer running for two weeks straight to ensure the pond made a full recovery before turning the unit off.

Based on the weather pattern and the water quality data collected, the pond was certain to have a fish kill if it were not for the diligence of onsite staff and the lessons learned from the fish kill in 2015. As unpredictable and as localized as weather can be, it is important to understand when you are at highest risk of having an issue, what symptoms to look for, and what to do if you find yourself in a desperate situation. All productive fisheries have an inherent risk of experiencing a lethal oxygen crash if proactive measures are not taken. When in doubt, involve an experienced biologist to minimize your vulnerability.

Contact the experts at 888-480-LAKE (5253) for all of your lake, stormwater pond, wetland and fisheries management needs.

David Beasley is a fisheries biologist leading the fisheries division for all of SOLitude’s service areas. David has an extensive background in progressive management techniques related to water quality, plankton management, fish species management and population dynamics, and is highly experienced in the creation and maintenance of both balanced and trophy fisheries. His expertise includes the management of ponds and indoor facilities for aquaculture purposes, and the development of more than 27 species of forage and predator fish, including warm, cool and cold water species. David graduated from the State University of New York in Cobleskill with a Bachelor of Science degree in Fisheries and Aquaculture.